Remixer Of The Year Awards 2005

Here are the winners of this year's awards, congratulations to everyone! And remember... as always there are no losers on this page! 😊

Who made the best remixes in 2005? Who was most active and supportive?

Who do you think deserves this award in 2005 for providing great remixes over a period of 5 years or longer?

Most Innovative Remix (c64 or Amiga)

What remix really made a difference in 2005? Things you maybe never heard before? Creative and different takes on originals?

Who made the best impression on a scene radio show in 2005?

Swedish Immigrant of the Year

Who made the most impressive immigration to Sweden in 2005? 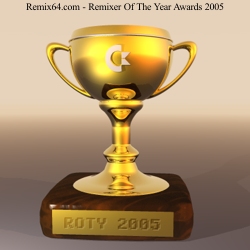 To all winners: Feel free to display the ROTY cup on your homepages (along with your Rank and Category), to boast about your triumph! 😃 Disclaimer: Some of the votes have been disqualified for being invalid (i.E. incomplete data, releases from a different year, votes for newcomers who were not newcomers etc...). The results do not claim to be error-free.