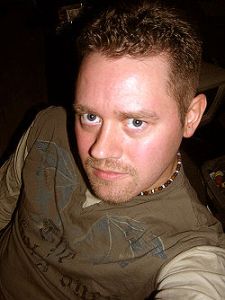 Amiga demo group founder of Kefrens and c64 remixer Jess Donovan Skov-Nielsen (Razmo). Sadly Passed away a few week ago. He was a brilliant coder and a well respected musician on the Amiga and a very able C64 remixer. He was well known and liked on the remix64's forum for over a decade and contributed to the remix scene with 9 remixes. This is our way to pay tribute to him.

In 2002 Razmo made his first C64 remix of a little known SID called Tiikerihai from AMJ. Using vocal samples.this would be a sign of future remixes where he'd rely on samples quite a lot.

Razmo: It ended up being a strange mixture of Russian Kozak, Trance, Organ music and downpitched Indian vocals (to make them sound more russian)... Later on I realised, that the tune is Finnish, and that Tiikerihai means Tiger Shark

In November and December of 2003. Razmo produced two more remixes. The first of which is Demons First by Neil Baldwin. This remix doesn't stray too much from the original and keeps to the essence and feel of the original.

Razmo: I find the melody very strong, one of those that put me in a mood without really knowing why, it just does. I tried to catch that moody experience with this one.

The second song of 2003 saw him remix Action Biker by Rob Hubbard. Again keeping fairly safe and keeping with the original Razmo created a faithful and cute remix.

Razmo: I tried to do what I read Hubbard wanted to give the games company when he wrote this one; a cute song. I feel that i managed that alright. The lead melody (flute) was made using a physical modelling synth (Yamaha VL70M), which is why it sounds so real and dynamic. I recorded it using a breath controller. I later realized that the notes in the lead melody is in fact incorrect, though I do not think it's the biggest of problems.

In Febuary of 2004 Razmo produced arguably his best remix in Terra Cresta by Martin Galway. As i said the use of samples will be often a feature of Razmo's remixes and in this case used very heavily. He doesn't play safe this time and adds a lot of his own ideas whilst keeping the nostalgia feel. A great remix.

Razmo: What can I say... It's a 4/4 version of an otherwise exelent 3/4 tune by Galway... I tried to catch the feeling of a gigantic robot assembling in the beginning, as the original game is also about robots. The Robot talk was done with a demo version of Fruity Loops.

It would be over 3 years before Razmo would release his next remix. In 2007 Saw his version of Antony Crowthers rather catchy R1D1. Again featuring samples at the start from Star Wars and an obvious play on R2D2. Feeling Euro Pop/Jarre in nature it's an unusal mix that somehow works.

Razmo: I wanted this version to be jolly feelin' ... I pictured R1D1 happy and strollin' down the road singing his tune loud... thus, I ended up with this very eerie lead sound that is supposed to resemble R1D1 singing... it has a very characteristic vibrato to it, that came by accident, but it makes the lead very organic and droid-like, though being at the brink of glass-shattering pitches sometimes :OS ... and yes... it's very jarre'esque in nature, which is fully intentional.

A few month later and despite being planned for a SlayRadio Halloween show which he missed the deadline for Razmo released his most professional sounding piece of work. Again using samples through out but more subtly than before with this Ceepy halloween remix. Works nicely.

Razmo: With this tune I wanted to create an eerie and sinister sounding tune at the same time... the Harp which is one of my favourite instruments of all time sets the mood perfectly for this tune I think... it was played on my E-mu E5000 sampler, and was sampled note for note from a physical modelling plug on the PC (as I do not use plugs)... it filled more than 70MB in finished form and was recorded in 61 keys at 8 different velocity settings... 480 samples in total in full length... that's why it sound so rich and dynamic.

After another lengthy break 2010 saw his remix of Wizardry by Graham Jarvis and Rob Hartshorne. He just didn't get along with the mix and ultimately got fed up with it. He felt however it was good enough for release so he did just that to mixed reaction.

Razmo: I never got 100% satisfied with this remix actualy. It is OK, but I think I could have made it much more detailed, especially in the drums department. In the end though, I feel it does a decend job, but nothing extrordinary. I decided to let it out simply because I got fed up with it, and thought that maybe someone would like it anyways. I feel that the synth-melody line was perfect for what I wanted, but somehow the drums lack, and I could not find anything else that would make it better... also, my drums are too dry because the Jomox XBase 888 that I used had no FX, and I had no free channels to route especially the crash cymbal to a reverb etc... also the tune is too short... just as the original.

Fred Gray's Mutants got an airing in 2012. As with many there's those samples again. With quite a few Razmo's remixes they are usually there to tell a story as this one does too. A very creative remix that moves the melodies around in a different way to the original.

Razmo: Unfortunately I'm not satisfied with this work, but I had to find a stopping point on this. What I like about my remix is the start... when the melody begins I loose interrest, and I guess it shows a bit. The end is an exeption, which I actualy also like, exept I wish I had spent a bit more time EQ'ing things... it's a bit muddy.

Unfortunately, the same year he would make his last released remix. Saving the best til last Razmo gave Mark Cooksey's Ghosts 'n Goblins a bash. A fun and jolly version with comedy horror samples. This would be his final bow out in remixing.

Razmo: Am I satisfied with this remix? ... no... as usual I always find stuff later that I feel I could have done better, but just to have finished it is a milestone for me as it takes quite an amount of dedicationto get stuff finished.

Yes... I like zombies... horror in general, and I know it shows😉 ... and yes, I changed some of the notes in the melody, but this was purely intentional to give it a certain feel

Thank you for everything Razmo. From your amazing work on the Amiga to the great remixes you made. Sadly gone but not forgotten. RIP!

thumb_up Like - 2 like this.
Dr Future
RIP Razmo!
Marcel Donné
Much to soon mate, much to soon ????Rest In Peace...
Dan
Always sad to hear of someone passing in the scene, especially so young and so bursting with talent.
monty
Damn, that sucks! From time to time I'm playing his Tiikerihai remix because it always makes me smile. Rest In Peace, Razmo!
KlingKlang
Thank you ???? thoughts to his family and close friends
Slaygon
Sad, sad news!
Rest in peace!
Max Hall
Really sorry to hear this, my all time fave, has always been "Terra Cresta Remix" Thank you for that Razmo ;)
Dasse
RIP! I am sure you continue making remixes Over the rainbow now!
LaLa
This is terrible news. :-( RIP (Remix In Peace), Razmo!
NecroPolo
Really sad news :/

Rest in Peace, bro'
Avid
RIP to an awesome composer. Rest well and condolences to his family and friends.
Jerry
Until we meet again. C64 Forever!
Lutz Osterkorn
Great Remixer but very sad news.No one should die so early. RIP :-(
OrkoSoft1987
RIP and soooo much thx for the great remixes and the top demos from kefrens. One of my fav demo scener group
Eddie Legs
From other Musican from Holland and Commodore user from 1983..


Sorry for the los. condolences to his family and friends R.I.P Razmo