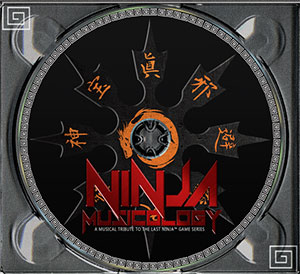 Massive respects to the FastLoaders!

Remixing tunes from The Last Ninja is a tricky business - seemingly everybody remembers them differently. Remixing them in a hard rock style is even trickier - mostly because music from the Last Ninja series has been remixed over and over so many times on RKO already (well over 200 remixes and counting). Yet, the FastLoaders, a group of Last Ninja enthusiasts / rock-band from Norway have managed to do it better than most by treating the tunes with utmost care and respect, with faithful arrangements, and with impeccable mixing.

We are living in a new golden age of SID remixes when several related crowdfounding campaigns were going on simultaneously, and Ninja Musicology is the one of the first ones to emerge with a release. It has been a long and difficult road for the FastLoaders, as unfortunately their Kickstarter campaign was not without its controversy that involved lawyers and System 3 copyright claims. But they came out of all that kerfuffle with renewed energy (if not entirely unscathed), in its final push the campaign was successful, and as a result we've been given a treat that was well worth the wait. If you missed their crowdfunding campaign, no worries, you can buy the album on MegaFounder, and I'm sure the album will pop up on all the usual retro game music shops, too.

How much respect they have for the source material already starts to shine with the first few notes of the very first track on the first disc of their 3-disc album. I don't think I've ever heard a more serene, more relaxing remix of the Wastelands Loader tune. It blends oriental flutes and other instruments together with a lead guitar, making it obvious from the get-go that this will be no ordinary rock/metal album.

And so it goes on with one track after another, each bringing its own unique touches. The Wastelands in-game tune with its throbbing bass, The Wilderness in-game tune with its edgy instrumentation, The Palace Garden tunes with their oriental arrangements, the creepy Dungeons in-game tune, the precisely executed Palace in-game tune... By the end the Inner Sanctum Loader becomes a cherry on top of this Ninja cake. And that's just disc 1! All this is layered with superbly played guitar sequences, with carefully selected synth sounds, and with energetic drums, sprinkled with ear-candy here and there for good measure.

Matt Gray's Last Ninja 2 tunes naturally lend themselves to rock treatment, and the FastLoaders took full advantage of that on the second disc of the album. Call it the headbanging disc where you can totally rock your inner Ninja geek. The high production quality of the first disc carries over to this second one with booming bass lines (subwoofer highly recommended) and skillful guitar licks, all complemented with tasteful synthesized sounds. Just listen to the fast-paced in-game tune of The Street in which you can even discover a generous dose of 70's funk. Or listen to how they managed to recreate - and even enhance! - the ominous atmosphere of The Sewers. Or listen to The Mansion Loader, a short but sweet tune that sounds glorious in the hands of this band. All the notes are where you expect them to be, yet, it feels like I have just rediscovered them all over again!

But to be honest, as good as the first two discs are, my favorite is probably the third one of this project, even though it's the shortest one. I always had a thing for Reyn Ouwehand's compositions, and I was most pleased to hear that the FastLoaders took good care of them. An awesome blasting Intro tune? Check. Choir and koto in the Wind tune? Check. Melodic drips starting Water? Check. (A really nice touch!) Earth-shattering bass staccatos in Fire? Check. Did they remix even the game over ditty? Yep, they sure did!

A quick glance at the tracklist shows that all the tracks on the individual discs - one for each Last Ninja game - are arranged in the same order you would've encountered them in their respective original games, which again shows the amount of thought that went into producing this set. They even included the two original tracks from Last Ninja Remix on the last disc! That level of care also extends to the mixing and mastering. Sure, it's a studio album, but whatever equipment they used to record the tunes, whatever tools they've used to put the final touches on the tracks, all I can say is that I am absolutely floored by the well-balanced and crystal-clear audio that's blasting out of my speakers when I play their album. It's hard not to play each track at full volume!

But maybe calling this a remix album is underselling it a bit - it's a beautiful tribute, an homage. Like Armakuni bowing in front of the Buddha statue, so do I bow my head to the FastLoaders for creating, producing and delivering a superb package encompassing all the music of the Last Ninja series, a huge undertaking that they tackled with affection, dignity, and style.

Disclaimer: The reviewer contributed to the Ninja Musicology Kickstarter campaign.

Note that on October 15, 2016 you'll get a chance to listen to the FastLoaders play Last Ninja tunes LIVE in London! Check the Megafounder link below for tickets.