Reyn: The Blithe, The Blend & The Bizarre 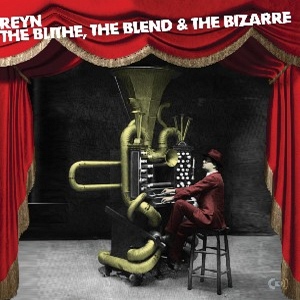 If I had to choose one word to describe Reyn Ouwehand's latest SID remix album, it would be "fun". Because doesn't matter what mood you're in, I guarantee you will be 100% happier after you listen to it, even if you are not familiar with the original SID tunes the album is based on. The style of music here ranges from 70s rock to jazz, from carousel music to soundtracks, from the blithe to the blend, and even the bizarre - which, coincidentally, is also the title of the album.

Reyn Ouwehand, a former member of the Maniacs of Noise music group on the C64 who is also known as the guy who did the music for Last Ninja 3, has become an accomplished musician himself with his own studio set up in a former church (yes, a church, I am not making this up). Although he has countless albums behind him on which he worked as producer, mixer, keyboardist, guitar player and who knows what else, he is also very active on the SID remix scene. This latest is his fourth remix album already, and he has also appeared as a live performer at several Back In Time Live events either as part of the Stuck In D 80's group or - like on this album - all by himself.

Because yes, every instrument you hear on this album, whether it be a piano or a guitar, a cowbell or a glockenspiel, or 16 clones of Reyn singing and clapping, it's all played and performed by Reyn himself (probably exactly as shown on the cover art of the CD: all at once). He has raised the bar on the one-man-band concept - and then some. Think Deflektor from "Nexus 6581" times twenty. This makes the album very organic and full of life. Most of the tracks faithfully follow the arrangements of the originals, so if you want to hear the musical talent of Reyn shine through improvisations instead, try to find a live recording of one of his BIT Live performances or listen to Reyn & Boz's occasional "Sunday Service" on Slay Radio, broadcast straight from Reyn's church studio.

Although there are 20 tracks on the album, the total length of it is barely 42 minutes. That's because many of the tracks are less than two minutes long, some even shorter. Heck, it takes more time to read the excellent liner notes of the accompanying CD booklet than how long some of the corresponding tracks last. Frankly, I would've preferred less tracks with more meat on them, or maybe medleys in the style of "Asian Legends", because such a short time doesn't allow the themes to fully bloom, but this rapid succession of short ditties does keep the fun-factor of the album high.

The album can be divided into three major sections. The first section consists of longer, predominantly classic rock pieces. The first track, "Zeppelin" (0:39) is a short little tune that immediately sets the mood for the album. It is followed by "The Great Giana Sisters" (3:41) which wouldn't sound out of place from the famous "Yellow Submarine" album of The Beatles: it's jumpy, it's happy, it's fun. "Ghosts'n Goblins" (4:16) starts out like a Dracula soundtrack from the early 1900s, but then it quickly turns into a more traditional rock arrangement with some untraditional twists. "French Frittes" (1:32) is an eclectic mix compressed into 92 seconds, while "Mutants" (4:18) is a clearly defined progressive rock piece with its captivating melody kept intact. Reyn turned "Ghouls'n'Ghosts" (3:39) into a sort of children's tale resembling some late 60s, early 70s hippie music. "Samurai Trilogy" (3:36) is another cutesy tune with some sharp turns in its arrangement that makes it
sound a little haphazard.

The second section of the album takes us to a trip through an old amusement park. I think "Stifflip & Co." (2:16) is one of the highlights of the album: it's crazy insanity in the style of carousel music. Although presented in a bit slower tempo than the original, it's still fast paced and its happy-go-lucky style is I'm sure how the late Richard Joseph intended it - it's a perfect tribute to him. After this comes the short "Hunchback II" (0:30) which continues the amusement park theme. So does "Fruitbank" (4:06), an underrated Johannes Bjerregaard composition that finally gets a much deserved remake in the hands of Reyn. The uptempo melody is complemented perfectly by all the bells-and-whistles, erm, I mean, timpani, whistles and banjo that were hinted at in the original SID, too. This is definitely one of the best tracks on the album.

The famous "Wizball" (0:09) guitar riff is the lead-in for the third section of the album which contains lots of short pieces. The first one is "Magic Johnson's Basketball" (1:23) which I could best describe as funky blues straight from the Southern US. "Boulderdash" (1:39) is another underrated SID tunes; here it appears as a jazzy piece. I only wish it lasted longer, but that's what the CD player's repeat button is for, isn't it? "Superstar Ping-Pong" (0:20) would work perfectly as a jingle on any radio program. I'm sure we all played the "Skier" (1:19) game, and this piano and banjo dominated cute remix of its music brings up great memories of it. It is followed by "Comic Bakery" (1:44), one if its in-game tunes, that is, not the famous title theme. Reyn did a perfect job of highlighting the playfulness of the original. The historic "Frogger" (0:31) theme is present in all of its early 80s joyful glory, then another in-game tune, this time from "Roland's Ratrace" (1:17) in the style of a ragtime piece. Just imagine Reyn in a straw hat sitting next to a honky tonk piano and you get the picture. This segment of the album is finished off by "Super Pipeline" (1:09), basically Debussy's "Golliwog Cakewalk" as it would be played in a sophisticated child's toy.

The album is closed out by "Garfield" (3:43) which is so perfectly rendered by Reyn that I can play it on and on forever and never get bored by it. It stands in a class of its own. This tune is the triple exclamation mark at the end of Reyn's album sentence which screams "fun, fun, fun!!!"