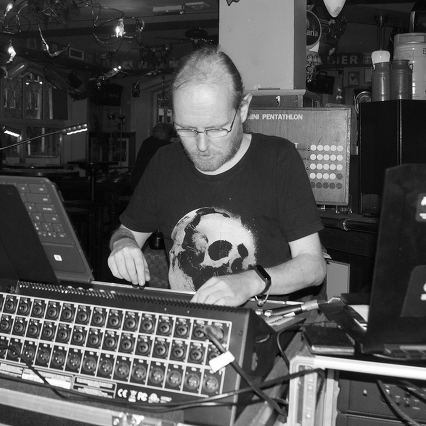 Armand was born on the 29th of March 1974 in the south-eastern part of Amsterdam in the Netherlands. After one year the family relocated to Hauset in Belgium where they ran a dancing/discotheque (Le Chatam) for four years. This is also the place where Armand got his strong roots in music. While laying in bed hearing the beats of i.e. Donna Summer's - I Feel Love disco and one track he remembers quite vividly: Patrick Hernandez - Born To Be Alive, but also much much more. After that they settled in the quiet village of Linden (near Nijmegen) where Armand grew up for the largest part of his life. This is where Armand gained his love for the countrylife, and started to respect the tranquility of nature. Armand is by no means a city-person.

Armand started playing the drums at the age of three and playing the organ at the age of five. He started his public music career playing drums in various local bands (while also playing snaredrum and various melodic drums with the national very succesful drumband St. Anthonis from his hometown Linden) and obtaining all the certificates for playing drums at the local music-school. In the process Armand learned solfege and how to read and write music notation/scores. Armand gained more and more interest for keyboards and computers when obtaining a Roland Juno-106 synthesizer and a Yamaha PSR600 keyboard. His first computer was an Atari 600XL homecomputer, but he soon switched to the Commodore 64 and later the Amiga and PC to create music with programs like Rock Monitor 3, Fasttracker and Protracker. He continued doing so until the mid 90's on the PC. In the meantime he continued playing the drums for bands like Jetset (classic rock), I-Star Connection (roots reggae) and more. Armand took up playing keyboards and synthesizers extensively after hearing a recording of Jean Michel Jarre's album Equinoxe. This is where Armand found the love for the synthetic and hypnotizing sound-landscapes Jean-Michel Jarre produces and knew he had to play synthesizers.

These instruments can say anything and speak for you, whenever words fall short or fail. In all it's a very emotional, personal and intimate process to compose and make music. After all you're giving, through the creative process of composing, producing, mixing, etc. people a glimpse into the depths of your soul

And with synthesizers Armand feels he can put those emotions and feelings out into the world the best. It's fair to say that Jean-Michel Jarre has been the biggest musical influence for Armand, along with Vangelis, Isao Tomita, Kraftwerk, Kitaro, Synergy (Larry Fast), Jan Hammer, Klaus Schulze, Harold Faltermeyer and Giorgio Moroder, to name just a few... Also Armand listens to contemporary music and (what some may call) heavy metal. Armand likes music from Pink Floyd, The Eagles, Creedence Clearwater Revival, Frank Zappa, Iron Maiden and especially Nightwish! Besides that he has a special weak spot for countryrock, southern rock and bluesrock. His biggest music love bar none however is: PSYTRANCE! (preferably the glitchy stuff)

So, soon after getting more aquainted with the ivories and knobs and buttons that accompany the keyboards he started playing with a coverband called Mixed Up. After doing so for eight years Armand set out to play keyboards for well-known Dutch coverband Van Gogh with whom he played and toured for six years. Meantime in the year 2005 Armand studied keyboards at the Rockacademie in Tilburg. After that he founded countryrock band The Lowlanders, who although short in existence made it to 2nd place overall at the Dommelsch Clash of the Coverbands in 2009 and played some memorable and notable stages (Paradiso, Floralia, 013).

Armand has always been working on his own projects and music, and made quite a few remixes throughout the years. He is working on his perpetual album called Nychthemeron for which no scheduled release date has been been planned. The music comes as it comes and energy flows as it flows. Every now and then he collaborates with some of his friends on his projects called Event Horizon and Bright Shining Stars, releasing the incidental tune. In 2019 he started his own music production company and indie recordlabel ASE Music and lately he does FoH-sound for a bluesrock coverband called Virgin and a lot of music production and mixing. Besides composing, playing and mixing music you occaisionally also can catch Dox, as his friends affectionally call him, djing a bit of psyfi (psytrance and progressive psy). Alongside being a musician, sound engineer and dj, Armand also very much is an entertainer who likes to connect with the crowd and make people laugh...