Amiga Power: The Album With Attitude - Review by Lee Tyrrell 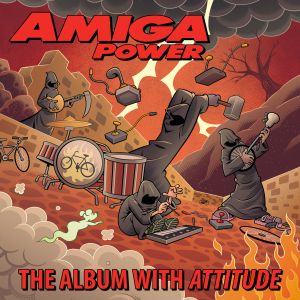 A review of the spiffing Amiga Power double-CD set, celebrating one of the most beloved magazines of the Amiga era.

In 2020, as I write this, video games are among the most popular and lucrative media formats worldwide. Ever since the earliest commercial titles, the industry has powered through an alarming number of digital revolutions. From the popularisation of VR titles and online arenas to the ongoing growth of processing power, gaming has rarely stayed stagnant. Bringing such electronic entertainment into the home was itself a big step forward in the mid-70s, with systems like the ZX Spectrum and Commodore 64 ready to refresh audiences once more at the beginning of the 80s. Throughout that decade, some of the first diehard gamers, groups and scenes were born.

For many, the Amiga is already distant history. As eager players currently clamber for the recently-released PS5, its ancestors are all too often forgotten about. In fact, when released in 1985 (and particularly two years later, when the 500 model hit the market), Commodore’s Amiga range of personal computers was a digital revolution all of its own. Their graphics were outstanding, they allowed for beautiful sound and the library of available games was eclectic to say the least. Across various iterations, the Amiga stayed on the shelves for nearly eleven years, but many enthusiasts continue to make new games, and try to get the most from its hardware.

The dedication of such communities should never be underestimated. Amiga Power, an early-90s magazine that came to personify the mood and wit of Britain’s computer gaming scene, is a prime example of that. Its sixty-five issues, published between ’91 and ’96, were a continual source of refreshingly honest reviews (often brutal) and much-loved features. But that’s only scratching the surface of Amiga Power’s achievements, which include funding games simply because they wanted to play them, creating an in-depth meta- universe of original characters, getting tangled in some interesting legal disputes and even hosting competitions that could lead to top-level design and development jobs.

The Commodore Amiga was legendary in its time; so much so that magazines like Amiga Power could build a large and rabid fanbase of readers across the UK. Before the widespread use of the internet, such publications were revered as sacred texts. In the 80s, players leafed through copies of Your Sinclair, CRASH and Zzap!64 religiously, setting the stage for huge, international gaming communities that today thrive on social media. Amiga Power had its own proto-memes, burned into the minds of its audience, that predate modern trends, and took an active hand in the ongoing development of the scene. Therefore, it’s no surprise that, over twenty years later, a double album celebrating the magazine’s influence was comfortably crowdfunded through Kickstarter.

Amiga Power: The Album with Attitude perfectly captures the spirit of that magical mag, across two discs of remixes from some of the best VGM composers and remixers of all time. Game music aficionados will instantly recognise names like Ben Daglish, Jeroen Tel, Barry Leitch, Tim Wright (aka CoLD SToRAGE), Mark Knight (aka TDK), Chris Huelsbeck and Allister Brimble – many of whom I’ve been fortunate enough to welcome onto my podcast, The Sound Test. But even that impressive list is only the beginning. There are thirty-five tracks in total, boasting the talents of too many people to even bother counting, and all of them bring something unique to the table.

The music alone provides a diverse library of the Amiga’s very best tunes, reimagined for the 21st century. Though a largely nostalgic journey for those lucky enough to have lived through the halcyon days of home computer gaming, the collection is equally valuable to new ears exploring for the first time. This is where I admit that I’ve never touched an Amiga in my life. Unfortunately, I was just too late out of the maternity ward for that, growing up instead on a heady brew of PlayStation and Nintendo consoles. For people like myself, and younger (do people born in the 21st century actually exist?), Amiga Power: The Album with Attitude is as much a potted history of the zeitgeist as it is a wonderful collection of music.

That’s where the Mega-Booklet comes in, and I’ve made sure to capitalise it because mega is most certainly the word. Written, designed and edited by Matthew Smith, exactly one-hundred pages of history, trivia and comedy sit wedged between the two discs. Opening with an imaginative introduction that actually continues some of the meta- narrative first established in Amiga Power (namely, The Four Cyclists of the Apocalypse), the booklet then goes on to exhaustively detail the magazine’s evolution and the various tales that have afforded it such notoriety over the years. Reading through it is never dull, as it meticulously (yet humorously) uncovers the madcap sensibilities of Amiga Power’s staff, along with their various pre-occupations.

Matthew’s not alone in the booklet either, as listeners are treated to separate commentaries for every single track – often featuring perspective from the magazine’s writers and editors. Even many of the musical artists provide insight on their work, meaning that – across only two pages for most tunes – you can pick up a good knowledge of how a game worked, why it was well received and what made its soundtrack special. For me, who missed out on the Amiga scene by about two years, it’s an absolute treasure trove. All of this is saying nothing of the music itself either, which is a truly colourful carnival of different sounds and genres.

Disc One concentrates on Amiga Power staff picks, consisting of some of the writers’ most beloved releases. Appropriately, it kicks off strong with a brand-new rendition of Sensible World of Soccer’s pumping, upbeat theme, complete with vocals from the game’s original developer, Jon Hare. From there, it sails through an impressive list of acclaimed titles like Pinball Fantasies, Speedball 2, Guardian, The Chaos Engine and many, many more. The tunes, and their new interpretations, are an absolute joy to listen to, but the whole experience is put beautifully into context by the mega-booklet. Despite years of intimacy with VGM history, and interviewing many top names in the industry, I learned a lot about what music meant to Amiga players, how it was incorporated and some of the amazing stories behind certain tracks. For example, who would have thought that The Fall’s Simon Rogers had a hand in composing for a cyberpunk ice hockey and handball simulator?

The centrepiece of the first disc is an emotional version of Cannon Fodder’s Narcissus, which manages to posthumously include Ben Daglish’s signature flute playing. Thanks to some clever production from Andrew Barnabas (of Bob and Barn, later known for games like MediEvil), Ben’s wonderful playing is mixed with a full live band, also featuring Mark Knight and (again) Jon Hare. It’s a genuinely spine-tingling affair, and among the slower pieces on the album, but it comes with a particularly compelling background too. Due to the use of a poppy in official artwork, Cannon Fodder’s developers got caught up in a famous tussle with the British Legion, who stubbornly ignored the title’s clear anti-war stance. I’d read of a lawsuit surrounding that debacle in the past, though I never knew of Amiga Power’s role in it before sitting down with this album.

The second CD is focused on music from the magazine’s coverdisks, prized by subscribers for their wide selection of full games, demos and other interactive features. As such, over eighteen tracks (with one hidden...), Disc Two presents a deep well of hidden gems, sprinkled with a dash of the same anarchic humour that became synonymous with Amiga Power in the 90s. It’s here where you can hear the official theme for Gravity Power, a title that the publication helped fund and design, composed by Chris Huelsbeck twenty-five years after its initial, musically silent release.

As Disc Two continues, it runs through a fascinating mix of more obscure theme tunes, including an unofficial Space Invaders sequel with particularly smelly aliens, a licenced HMV tie-in where you play as a dog trying to prevent music piracy and a tennis game where you can get a rally going between Pulp Fiction’s Jules and Vincent (just because Amiga Power suggested it). To bring the double-CD set to a close, listeners are treated to a fresh remix of It’s a Skull by Jeroen Tel. In one fell swoop, it manages to bring together a true VGM giant, one of the magazine’s most prolific features, reader-submitted music and more of the playful comedy that defined every edition Amiga Power’s 65-issue run.

If you were there at the time, that’s surely all the information you need to know that Amiga Power: The Album with Attitude is worth the price of admission (and then some). If you weren’t and, like me, you’re simply passionate about the history of gaming and music, you’ll have to get your own copy to find out more. And take it from me, who’s never physically touched an Amiga in his life, that you’ll never feel alienated; in fact, reading the booklet and listening to this album feels more like being warmly welcomed. Just a handful of pages in, I found myself burning to read Amiga Power back issues, or emulate the classics its writers speak so highly of. Around halfway through, once I’d fully gotten to grips with the style, comedy and characters, I actually felt like I was part of it – like I was joining the family.

Now, you’ll have to excuse me for a second; I’ve just felt a bony finger tap on my shoulder...