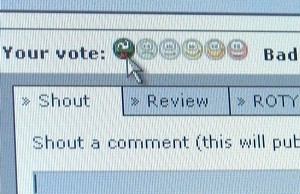 There are occasionally posts on the messageboard when people post a link to a song, and then come back to the thread later, complaining x views, and only y people downloaded the song, or x downloads and only y comments. This pisses me off: partly because it's whining, and partly because there's an element of emotional blackmail in there as well. Or at least passive aggression.

But anyway, this sort of thing comes from people who are desperate for their music to mean something to the outside world, but who aren't quite brave enough to spread it around, so it gets spread to the Remix64 community, so their need for validation has to be met from a relatively small group of listeners who are prepared to write comments and who have actual free time.

What is amazing is how far your music can reach if you actually let it fly into the outside world rather than just trying for validation in a small community. And it feels much better to get rare praise out of the blue, or to learn you touched someone's life than it does to drag a group of musicians to say something nice about you.

Of course, there's the odd chance that your music sucks: but that's the great thing about spreading the music: you might just find that listener who's as dysfunctional as you! In which case, you may have found a friend for life!!

The weird thing is that the feedback often comes years later when you're least expecting it: like the Australian guy whose Granny loved only three SIDs: Revenge of the Mutant Camels 2 was one of them, so the track off RKO (and the track off Karma which I sent him free because he could be bothered to email me!) reminded him of his special relationship with his Granny. Even odder, the chap's Dad hated SID music but loved my rendition of I Know Him So Well.

There's other stories I can tell from a long history of SID remixing, especially from the early days when SID music was a lot harder to find, but as musicians we touch lives as our music flies into the world on our behalf. We should trust that our fans will find us eventually if we fly far enough and with enough conviction!

Here, this chap is showing us exactly how much conviction he has (and at what elevation).